History of the Golf

A course more than century

In 1887, some british residents members of the British club, who wanted to practice their favourite sport during their summer holidays in Biarritz decide to create a golf course on the “plateau du Phare”.
On the 13th of march 1888 the inauguration of the British golf club was held in presence of the Princess Frédérika of Hanovre. The golf course “Le Phare” has 18 holes and 9 holes for ladies. There is also a croquet pitch, another for cricket, several tennis courts and clay pigeon shooting.
The following year, Tom and Willie DUNN, well-known English architects, were contacted to redesign the links. Then, the course was extended as far as the current “Chambre d’Amour” and certain holes have a special feature called “the chasm”, a gap across the ocean, which creates both a challenging and beautiful course.
In 1920, the committee decided to call on H.S COLT, renowned architect (who a few years later designed the course of Chantaco), to improve the attraction of the course which was gradually being deserted by foreign golfers.
The modifications recommended by Mr COLT were essentially in respect of the length of the course, in which many holes were just a drive and a wedge.
The improvements were inaugurated the 24th of February 1924. The Club House seemed obviously too small and was also extended and renewed in 1926.
During World War II, the part of the course situated in Biarritz was requisitioned by the german army and the twelve holes of Anglet were converted into an 18 hole course.
After the war, the holes situated at the “Chambre d’Amour” which had been seriously damaged were mostly unused. This piece of land was sold in 1964 to the company which built the current VVF resort.
At the end of the sixties, some major tree planting gave the course its current aspect. 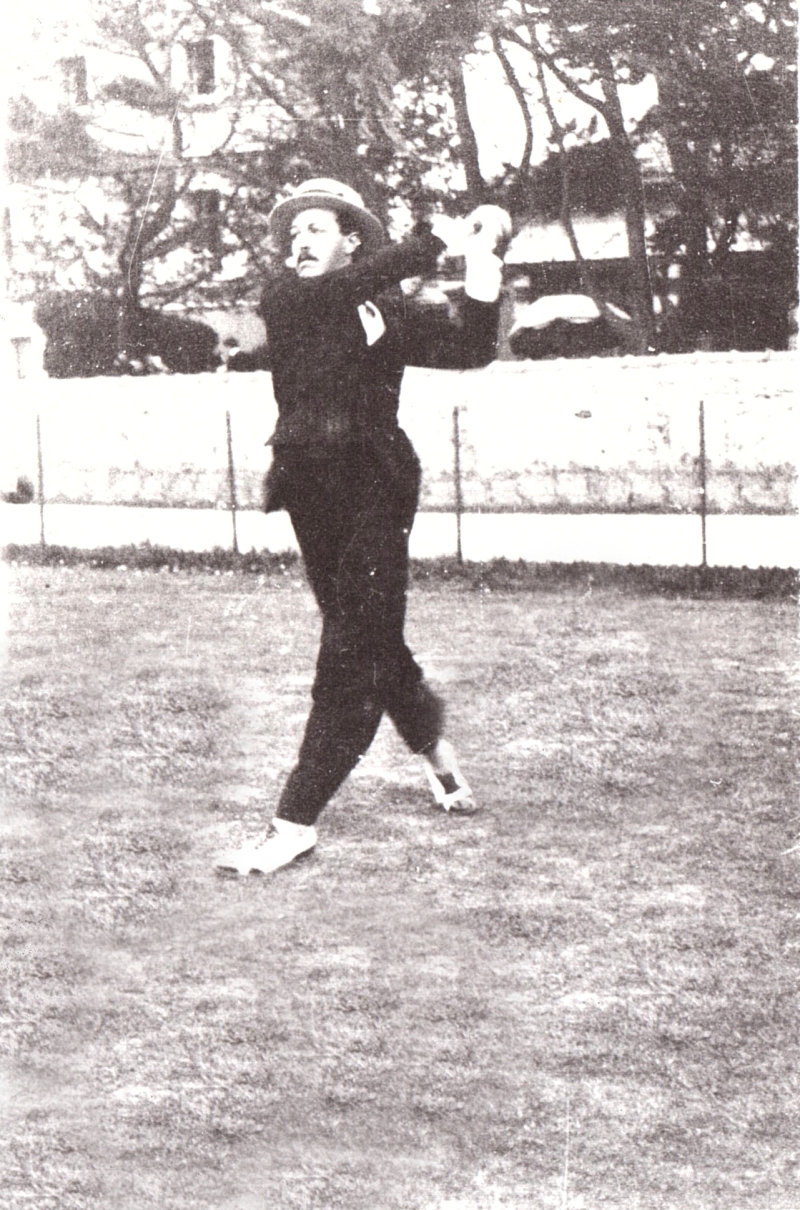 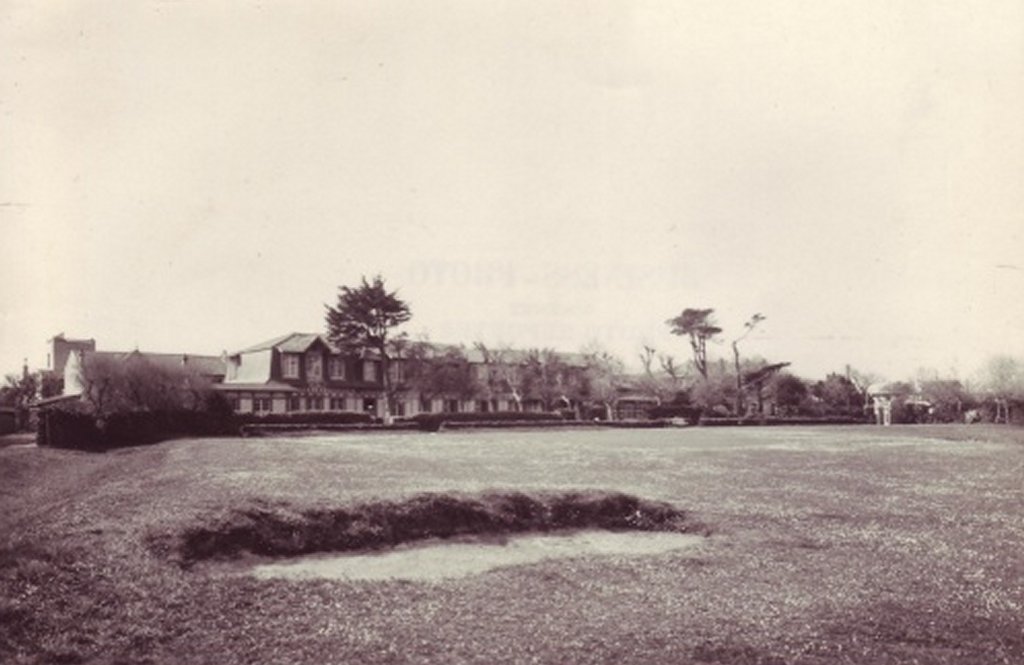 In 1887, in quartier Larrepunte, the Société Notthingham&Cie, had prepared links on a golf-course belonging to him so that his british guests could practice Golf.
The same year, the Tourist Information Bureau undertook a special comission to find a site where he could settle the Golf de Biarritz game, to make a surprise to his foreign visitors.
But, meanwhile, some members of the British-Club, set up by the english colony, had discovered et chosen the great “plateau du Phare” to create the Biarritz-Golf-Club.Thanks to rapidly coverred subscriptions, the project was realized. Alcide Augey, Mayor, and the Town Council followed this building with interest and voted a grant.

The inauguration had place the Tuesday 13 March 1888 at 2h30 pm in presence of the Princess Frédérika of Hanovre who assisted to the first played competition on links of Biarritz and who was opposing… ladies.
Lord Shand, adviser/councillor of the Queen Victoria, was the first President of the Biarritz-Golf-Club, Mister HC Bradshaw was named Treasurer and Mister P. Gurdon, Honourable Secretary.
Messieurs Levenson, Hermann, Doctor de Lacy, Thorold , Heeren and Fowler were composing the Committee.

Two architects, brethren Dunn, Tom and Willie, are going to conceive the courses, since there was two : an 18 holes for men and nine holes for ladies, who were already asserting legitimate equalities of rights since they were being much more to play… But the current course has nothing to see with the original one.
In 1904, the teacher of the Club, G. Dunn was a patient competent man who was charging 3 francs for an hour of lesson and 4 francs for a 18 holes course.
On the first floor of the Club House, a charming drawing room and balconies were reserved to ladies.
The ground floor was comprising the smoking-rooms, the bar, the secretariat, a huge dining room, an office, as well as the shed to bicycles.
One of the attractions of the club house was its terrace near the 18 th hole green, where players were meeting to have tea after their game.
The inscription for the season cost 120 francs for men and 50 francs for women, price who comprised the cleaning and the tidying of the equipment.
Several others activities were proposed to members : there were a ground of cricket, of croquet and two courts of lawn-tennis

The peace returned, it was time to modernize the course of Le Phare.
One charges an expert : this will be Colt, notably author of the Touquet, of Saint-Germain, of Saint-Cloud. His report is eulogistic and without concession:

“Messieurs, the links of the Golf Club of Biarritz are indebted to the nature of their grounds/soils for a precious advantage; to my acquaintance, your Golf is the only one in France to be entirely traced on a sandy golf-course, and golfing is thus possible in all season and by all weather.
Moreover, it is possible to benefit from diverse movement of grounds: depression, natural cavities, trays, etc.
The lenght of the course is insufficient. And a great number of holes has only a drive and a wedge. Greens are uniformly broad and flat, with bunkers insufficiently studied and badly traced.
The modifications I propose to effect according to the given indications on plans and sketch here-united, would make the Golf de Biarritz one of the best of the continent.
I value the expenditure to about 3.000 sterling books.
The current water canalization, installed on all the greens (except two) ought to be completed by the upholding in good state of the links. It is indispensable to obtain water in abundance and to a sufficient pressure. The fairway has appeared to me to be in a nice enough state. It is not the case for the greens. Your green-keeper is at the same time Club-maker and teacher, this is a great mistake; beyond the improvement of the links which would result from it, and would constitute an excellent complains for Biarritz, you will effect notable economies in engaging a first class specialist green-keeper who would be in the obligation to devote all his time and his work to the upkeep of the ground.
In the case you would decide to give following to the project, I would pledge you to confide this performance to the Harris Bross House, of Guilford ( Surrey ).
The management of the works would be made firm, on the spot, by their representative who would employ the local manpower and would use, if necessary, special machines as mechanical ploughs, scoops, etc., (of whom profit is excellent from the economic and rapidity in the work point of view ).
For my part, I will come back to Biarritz two or three times to supervise the evolment of the works.
I would, Messieurs, be happy, to see the Golf de Biarritz become the best Golf of winter in France.” 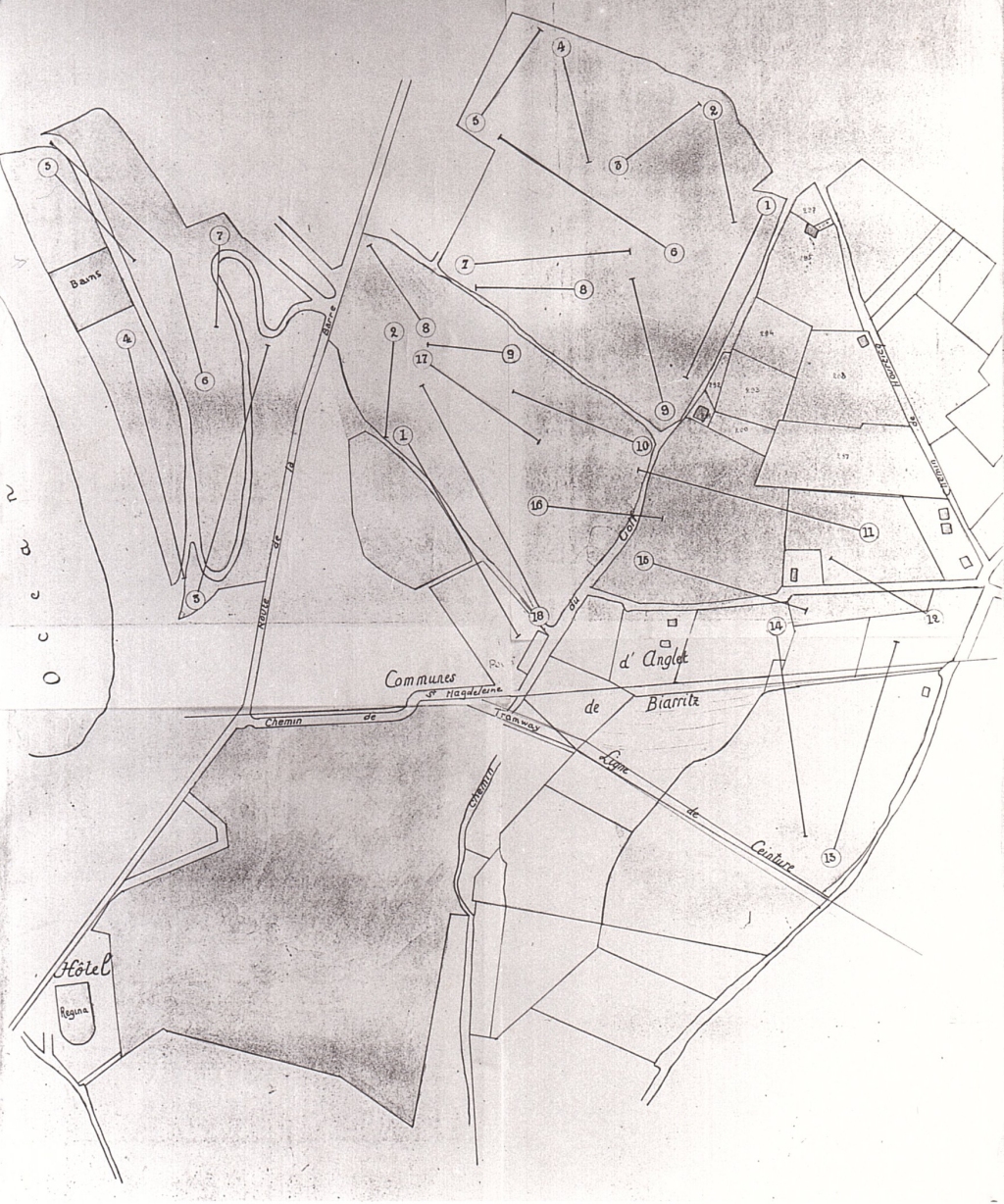 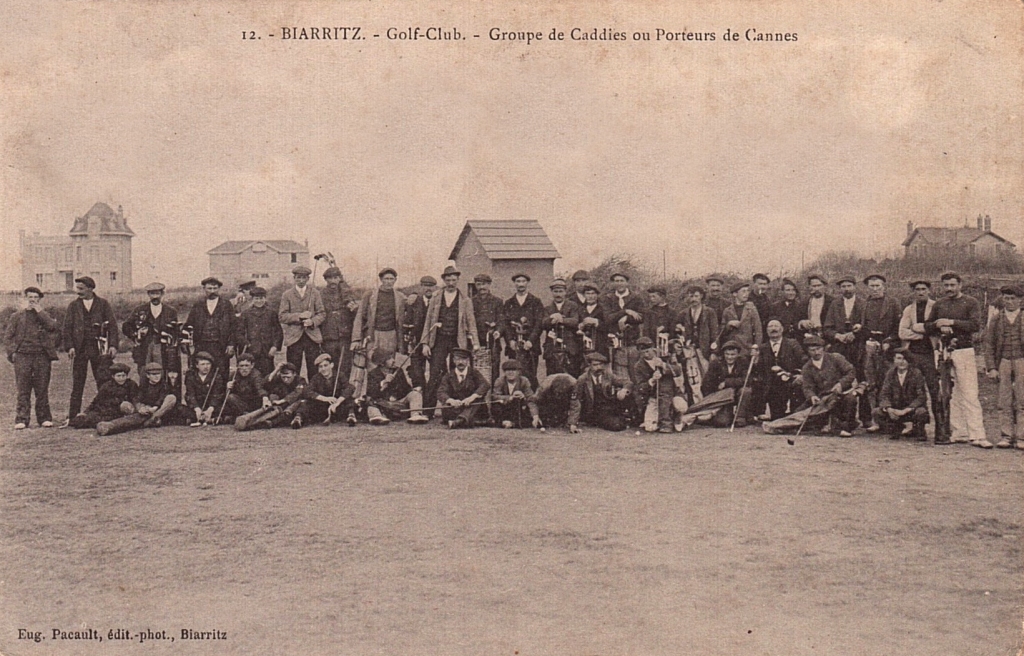 The Biarritz Golf Club, since his origins, has been the great theatre of sportsmen and gathering events and the best european players rubbed shoulders, during wonderful receptions, with Kings Édouard VII and Alphonse XIII , surrounded by the most famous representatives of the international aristocracy.

“The Caddie, a child of the country, is an important person ; his functions consist in carrying his master’s clubs in giving him the one he wants according to the position of the ball, the nature of the ground or the obstacle; he must,attentively, follow it in its fast flight to find it and to avoid his master the shame of a lost bale.
Alone,he is allowed to advise him and often does not deprive himself of doing so/it.”

All those Basques, pionners of the professional french Golf, have learnt the game carrying the british players’ sacks.